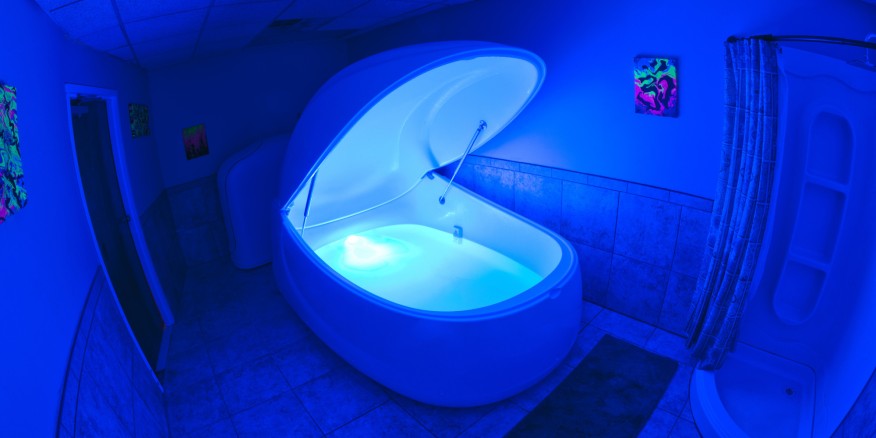 Sensory deprivation chambers are used in science fiction as narrative tool to access the subconscious and to channel something other – something bigger than the individual. From the womb-like pods in The Matrix to the triplet tank of prophetic savants in Minority Report, sensory deprivation chambers are a sci-fi mainstay. Recently, Eleven from the Netflix sensation Stranger Things uses a both a laboratory tank and a homemade tank to access the Upside Down – the dark and unknown world that parallels our own world in another dimension.

Now, sensory deprivation chambers, often called isolation chambers, have come out of the realm of sci-fi and into the real world. They claim to help clear the mind, calm the nervous system and solve a myriad of health problems.

The activity of of using one of these chambers is called ‘floating,’ and as an activity it’s hard to categorize. Floating falls somewhere between bathing, physiotherapy, and meditation. Most float centres claim that floating will help to reduce stress, relax your muscles and help you to get better night’s sleep. But, it may be that somewhere along the line floating also crosses back into science fiction. I have heard stories of people who – after floating – have written books, had the clarity to make major life decisions, or had a chronic ailment disappear.  None of these were my experience, but after going, I can almost see how this could happen – almost.

There are no electrodes, there is no primordial ooze. There is just a tank loaded with dissolved epsom salts and myself. The water in the tank is only about a foot deep and is so thick with salt that you actually lay on top of the water as much as in it.

What I discovered during my 90 minute float, is that floating is an intensely personal thing. We are all bodies in a space – something that we are usually more or less aware of. But when you float, you are without space and (very nearly) without a body. While floating I felt myself drifting – I felt as though I had drifted so far that I would never be able to find the hatch to get out of the tank. The chamber is only about the size of a double, but bed my internal compass was without a direction and I may have well been in a different space, a different time, and perhaps even in another dimension.

Gentle music is supposed to rouse you out of your deep internal journey and signal the end of your float, and by some magic it did – barely. I was quite far away by the end of my float and the sound would have been easy to miss. I did not come out and write the next great Canadian novel, but emerging from the float centre I did feel more relaxed and like the world was in sharper focus.

With centres quickly popping up in just about every major urban centre, a float centre is easy to find and worth a try. The first time is a challenge, so go again and maybe, just maybe, I’ll catch you on the flip side.

When you enter Spa Scandinave Les Bains Vieux Montréal, it is a very different Scandinave experience. Though the circuit is familiar, the setting is not. It feels like you are in a cave – in a good way. The sound from the waterfall in the warm pool rumbles throughout the dimly lit space. The noise of the city, even the time of day and the seasons melt away and you are in an intimate chamber that invites you to escape into silence and rest.

The two defining features of the space were the sauna and the rest areas.

The sauna has a large bed or rocks in the middle of the space which provides even heating and a nice focal point to the room. The backlit benches and sloped ceiling made for a really memorable space.

The rest areas were cozy spaces with two levels of rest. One for lounging and the other for napping. Both of these spaces were lovely, but the napping room was one of the best I’ve encountered. The dark helped me to drift off for a while and nearly forget that I had to be on my way. As usual, I could have stayed for days.

Spa Scandinave Les Bains Vieux Montréal is a quiet meditative urban spa experience. It’s a great place to go to focus your senses and to just be a body in a space.

It’s that season of hiking, biking and hot spring hunting. Though a hot bath may be the last thing on your mind in the heat, feet can always use a refresher. Our feet take quite a pounding each day and a foot soak is a great way to care for your sore muscles. Here is a bath salt recipe made with fresh plants from my garden. It’s relaxing and refreshing — perfect for tired feet.

These are the plants that were available in my garden. If you don’t have these fresh ingredients, think about what you might combine and use instead. Consider using rose petals, cedar, rosemary, juniper, yarrow and lemon instead. Get creative — just use common sense and avoid plants that are irritants. 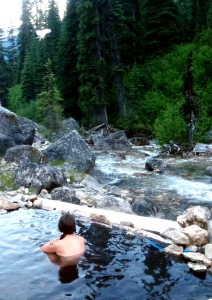 Deep in the Purcell Wilderness there is a secluded natural tub. I visited it years ago and it’s a place that I still dream about – the alpine meadows, the scalding water, the incredible views.

There are a lot of barriers to getting to Dewar Creek Hot Springs, but if you’re up for the muddy trek, it’s an incredible experience.

If you make it, you’ll be deep in hot spring country and even deeper in grizzly bear country – keep it wild.

This is so lovely, what a way to come into the world. Welcome little Selma! I’m looking forward to the Sauna Sisters Documentary to follow.

Part of the reason that I haven’t been active on Hotsprung, is that my little mermaid was born in the water in 2014. She is now an energetic toddler who, of course, loves the bath. I hope to share the story of her arrival here someday and many more posts about our adventures together – yes, I’ve been saying that for a long time, but I mean it.

Thanks to friends and strangers who have connected with me on Hotsprung and encouraged me to continue sharing my hot water adventures. It will happen again. Soon.

Recently, I went to the Banff International Mountain and Film Festival to support the makers of this fine film. On the trip, I had the pleasure of stopping at Radium Hot Springs once again. Radium’s current hot pools are in their third incarnation. This picture was laminated on a felt board display and had the caption “Couple at the Second Bathhouse.”  It’s a charming picture and looking at it gives me the slightest bit of bathing suit envy.

Hot spring season is upon us and it’s time to pack for adventure! To plan your trip in B.C. or the Northwest the best guide I’ve found is Hiking: Hot Springs in The Pacific Northwest.

It is a region by region guide to some of the best and most remote natural hot springs in the world. With area maps, spring descriptions, driving instructions, hiking trails and even the occasional photo it will get you where you need to go. The springs are divided into regions making it easy to plan a trip with as many hot spots as possible.

Cell phone reception and 4G in these remote locations is unreliable, so another thing to pack is a Backroad Mapbook. Hot springs can be off the beaten path and these books will show you roads that will not be in a traditional road atlas. They also contain addtional info about camping, hiking trails, GPS coordinates, elevation and other recreation ideas for the area.

Though both of these guides may help you find the springs it is always a good idea to call or stop by the local ranger station and ask about road and trail conditions before heading down that backroad. Hot Springs will often change in temperature and flow from year to year and the roads leading up to them can be very poorly maintained. The rangers can tell you what to expect on the road and at the springs this season. They will also be a wealth of information on spring ecology, backroad safety and wildlife.

Be safe and have a great soak!